Wondering how vines found their way to France and Italy? Credit the Greeks, with their love of travel, creation of sturdy carrying containers, and of course their passion for their drink of choice - wine. 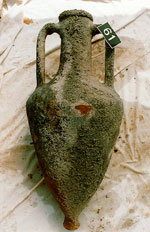 The Greeks loved wine. For them, it was a mark of culture. They looked down on those cultures who had not yet discovered wine, or who had found it but drank it ... gasp ... undiluted. The Grecian tradition of wine stretches back almost four thousand years.

Crete is the cradle of Grecian wine. Wine presses and grapes have been found dating back to 2000 BC in Crete. By 1600 BC in Mycenae, the vintners were cellaring wine, and wine merchants plyed a busy trade. Dionysus, the god of wine, had a large cult following, veiled in secrecy.

Homer and Hesiot wrote much about wine in their poetry, extolling this liquid that was everpresent at feasts, and worthy to sacrifice to the gods. They discussed the pruning and harvesting techniques of the grapes. Wine was carried to Sicily and Italy, to France and the Black Sea.

Other writers described the wines of Greece as being low in quantity, but high in quality. The Aegean islands especially were known for their product. Tastes back then ran to sweeter wines - wines were often dark, but were sweet, honeyed, and ripe tasting, according to the poets.

Most wine of this age was drunk young, just after bottling, or up to 10 years. As it was safer to drink than much of the water in the area, it was drunk with most meals, although diluted 1:2 or 1:3 with salt water. Undiluted wine was thought to be dangerous. Diluted wine, however, was well known to the Grecian people to have many medicinal benefits.

In modern times, Greece is no longer thought of as a high end wine region by wine enthusiasts. Greece grows 370,000 acres of vines, with around half being used for wine. This wine is mostly white and sweet, and not typically sought after outside of the country. The flavors used in Grecian wines, especially Retsina, require an acquired palate. They are often strong and salty tasting. A new breed of winemakers is trying to turn this around, growing well-known varietals such as Chardonnay and Cabernet in a style more appreciated by modern mouths.

Glassware and Amphorae in Greece