The Australians have been making wine for over 200 years, and Syrah has been a classic red wine in France for even longer. It's interesting, then, how many wine drinkers look at Aussie Shiraz as being a brand new creation. Bill Hardy, winemaker for Hardy Wines, came to Boston on a frosty January evening to discuss this fantastic wine variety and to review the history of wines in Australia.

Bill began by explaining how, almost immediately after Australia was settled, vines were being planted and wines sent back to England. "We became known as the John Bull's vineyards," he said with a smile. "We were making the wines that England wanted." As England worked to wean itself off its dependence on Spain and Portugal for the fortified wines those countries produced, Australia became a specialist in the brandy-added, high alcohol drinks.

After the second world war, immigration had a great impact on the wine industry of Australia. Italians and Greeks flooded into the country, seeking a new life. Bill joked that "Melbourne is the second biggest Greek city in the world, after Athens." The wineries began turning out table wine to meet this new demand for general drinking wine. It was only 1996 when Australia began drinking more table wine than fortified wine each year.

Soon winemaking exceeded what Australia and England could consume, and the wineries turned to exporting their excess. By 1985, the wineries exported $20 AU million dollars of wine in a year. By 2005, that had blossomed to an annual figure of $2.5 AU billion dollars in exports each year. Australia is now the forth largest wine exporting country in the world, only behind Spain, Italy and France. As Bill explained, "we now talk about Australia riding on the three Ws - wheat, wool and wine." 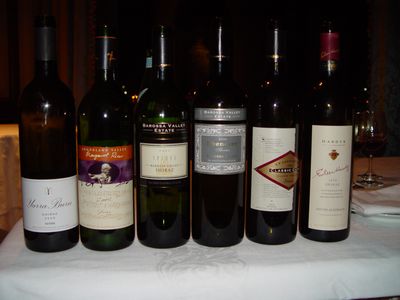 Bill now turned his attention to the history of his own winery, Hardy's. The winery was begun by Bill's great-great grandfather in 1853. The original Hardy was only 20 years old, living in Devon England when he flipped a coin between going to the US and Australia to make his fortune. Australia won, and with only 20 pounds Sterling to his name, and no contacts or friends to greet him, the young man set off. A winery was soon founded and thriving. However, the 20th century brought a series of tragedies to the Hardy family winery.

First, in 1904, the winery burnt to the ground. Bill recounted how this happened during the dry season. The local river had run dry, and there was no water to pump to put out the blaze. As the fire chief watched the wine barrels pop open from the heat, he came up with a brilliant idea. He put his hoses into the wine barrels, to put out the fire with the wine. Unfortunately, as most of the wine was fortified and therefore high alcohol, this quickly led to the utter destruction of the remaining structures.

Next came the first world war, when Bill's uncle was killed in France. Then, the driving force of the winery, his grandfather, was killed in an air crash in 1938 which also killed the heads of two other wineries. Hardy's winery was now without a real leader - until Bill's grandmother stepped in. She took the reins and ably managed the winery's business.

When Bill's father took the reins of the business, he decided to find a way to represent more of the wonderful variety of wines available in Australia. He made a deliberate plan to acquire small, boutique wineries that represented the best flavors of the various regions in Australia. This helped build the stable of brands available under the Hardy's name in current times.

Aussies have a funny way of speaking, apparently. When James Busby wrote about bringing the first cuttings of the traditional Syrah vine from France to Australia, he noted that many different spellings were in use for this vine's name. None of them were "shiraz". However, somehow in the dialect of the land Down Under, Syrah slowly morphed into being pronounced as Shiraz, and the name stuck.

Bill explained that his homeland provided the perfect climate for this famous grape. "In the southern third of Australia we have such a wonderful Mediterranean climate - cool wet winters, warm dry summers. This is similar to but dryer than southern France." The gorgeous weather of southern Australia allows full ripening of the Shiraz grape - more so than can be done in many other parts of the world in which Shiraz is grown. "We get some wonderful expressions of variety," Bill described. "We get wonderful ripening The definitive Australian Shiraz is big, plummy, pruny, chocolate". Australia also has another advantage with this grape. "Shiraz is reasonably disease prone, but because Australia is dry, we are lucky to avoid these problems."

While most wine growing regions need to graft their vines onto rootstock in order to resist the Phylloxera louse, Australia is lucky in that many of their vineyards are phylloxera free and can grow on their natural roots. This means the vines are much longer lasting, and can produce grapes for many more years.

Having learned so much about the history of Shiraz and Australia winemaking, it was time to begin tasting some wines!