The town of Jerez is locateded in Andalucia, southwest Spain. Sherry, at the time a simple red wine, was started by the Phoenicians here around 1100 BC, and the practice was continued by the Romans. The Arabs invaded in 711, renaming the town here 'Sherish'. This became 'Jerez'. And so a tradition was born. The delicious, rich wine is known both by the names of Sherry and Jerez.

Even simple things about Sherry have been decided long ago. The capacity of the Sherry cask (butt) was set in the 1400s! To help Sherry stay stabilized during ocean voyages of these times, brandy was added to the wine. This is why Sherry is now a "fortified", or alcohol-added, wine.

In 1933 the Consejo Regulador was setup to protect Sherry's consistency. In the mid 1990s, the EU ruled that all EU nations must abide by the ruling that Sherry only comes from this region in Spain.

There are dry sherries that can be served chilled, and sweet sherries for room temperature. Sherry can be created as a dessert wine or a cheese wine, or anything in between. The two main types of sherry are the pale, dry fino/manzanilla and the dark, full, dry oloroso sherry. 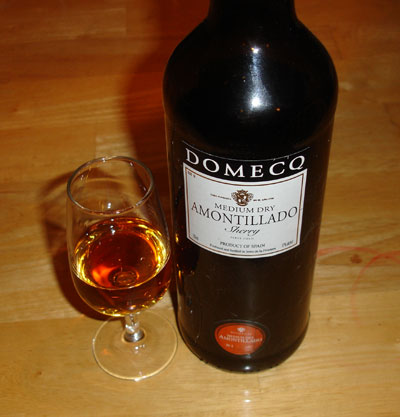 Andalucia holds sherry vineyards in areas where the ground has a lot of albariza soil - porous, white limestone/sand/clay/chalk. This sherry uses the palomino, pedro ximenez, and muscatel grapes. The grapes are harvested around September 8th. Sherry is unique in that it exposes the wine to air during aging - usually something that is prevented. A layer of "Flor", or yeast, forms on top of the liquid and holds back the air.

Amontillado is perhaps the most famous style of sherry, mentioned in the famous short story by Edgar Allan Poe - "The Cask of Amontillado". The word Amontillado, which is Spanish, is an adjective meaning "Montilla-like". Montilla is in southern Spain, part of the Andalucia wine zone. The fortified wines from this region are made using the standard Sherry production method. Montilla fortified wines are medium-weight, first maturing under a layer of flor (yeast cells), and then cycled through the 'solera' system where older casks are refilled with younger wine. This keeps the wine flavor consistant over the years. Amontillado therefore is a Sherry, made in Jerez, in the style of this Montilla beverage.

Sherry is aged for five years and is done with a solera method of blending. In this, the first sherry is "laid down" in a cask. The next year, a similar tasting sherry is put above it. Some sherry is taken from the bottom cask, and it is "replenished" with liquid from the cask over it, which is replenished from the cask over it, and so on. The "series" of casks is called a criadera, and the cascade method is called "running the scales". Only 33% of the solera is removed per year. In this manner, the sherry maintains a consistant taste. Often Sherries are labelled with the date that the solera was first started - often quite a while ago!

Sherry should be served at 57F. Because it is fortified it can last quite a while, but is not immortal :) Try to drink sherry within 5-10 years of its original date.

People tend to drink fortified wines such as sherry in small glasses because of their higher alcohol levels. The small glass mouth can help to minimize the alcohol aroma and prevent it from overwhelming the flavor. Sherry is usually sipped as an after dinner drink, perhaps with cheese or nuts.