Port originates in the Douro Valley, Portugal. The valley stretches east from the city of Oporto to the border with Spain. The term "port" can only refer to these wines, much like French regions lay claim to certain titles. Note that some people still call this "port wine" but that is redundant, sort of like calling a chardonnay a "chardonnay wine".

Port first became popular when the English were at war with France, and could therefore not drink French wines. The English went in search of a new location to set up vineyards, and the Duoro Valley proved to be quite suitable. The vineyards are laid out along very steep hills, terraced to provide footing for the vines.

In the seafaring days when this occurred, something had to be done to wine to allow it to survive the long ocean journeys. Brandy was added to allow the wine to last longer, and to be more resistant to temperature changes. Wines altered like this were called "fortified wines", and port is one of the more famous of the fortifieds.

There are 48 authorized grape varieties which can go into a port. The most common are 8 red and 8 white, with tinta rariz, tinta francisca, touriga nacional and touriga francesca topping the list. Port is kept in oak for a relatively short time, and depending on the quality of the year, is blended with other years for a consistant taste. It is then fortified and aged in bottles. Every Quinta, or 'house', determines its own vintage years. 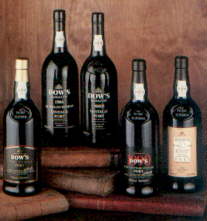 The standard port is meant to be bought and enjoyed quickly - that's why it doesn't have a full cork. It is not meant to be aged. Once opened, if the bottle is kept corked (stopped), it can last between one (Ruby) and four (Tawny) months before its flavor is lost. A vintage port, once opened, loses its flavor quickly (again, like wine). It should be drunk within 24 hours of decanting if possible.

Port should be served around 65 degrees, in a narrow wine glass, and the glass should only be half filled. This keeps the alcoholic content from overwhelming the flavors. It often needs to be decanted, and is traditionally served with Stilton or cheddar cheese. Port also goes very well with chocolate. Port aromas include pepper, smoke, truffles and black currant. "Standard" port should be drunk within a year or two of purchase. Vintage Port peaks at around 20 years for good quality port.

White Port is made from a selection of white grape varieties, and is then aged and fortified. It is typically a simple multi-year blend of vintages, can be sweet or dry depending on the house style.

Ruby Port is the most basic of port styles. This is made with a blend of red grape varieties and is blended from several years. It should not be aged, and tends to taste of berries, with light tannins.

Tawny Port is a ruby port that has been aged for several years in small oak barrels. This gives the port a tawny color, as well as a buttery, nutty caramel flavor. If a tawny port is listed as being "10 years" or "20 years", this means that the *average* vintages used in the blend is that number. A 10 year tawny might include some wine from 8 years old, and some from 12 years old, and so on. These are usually sweet.

Late Bottled Vintage was created specifically for the restaurant market, to give them a vintage type port that did not have a sediment and could last a while after being opened. The winemaker filters and fines this port and then pre-ages it for the consumer, usually for 6 or more years. When you buy your LBV port, you should drink it soon - it is not meant for aging. When you open this bottle, though, you can expect it to last for a full month before starting to lose its flavor.

Vintage Port is the high end of port releases. Only the best years are declared a vintage and used for this purpose. All of the grapes from a single harvest are used in a given wine. A 2000 vintage port contains only grapes from the 2000 harvest. This wine is aged in oak and then aged in the bottle. When you buy a vintage port, often YOU must then age it for another 10-30 years before it is at its best drinking flavor. This is the type of port you find in expensive cellars, waiting for decades to be enjoyed.