Cabernet Sauvignon is the name of both the grape and the wine it produces. Cabernet is known as one of the world's finest red wines, with its depth of complexity and richness of flavour. Other names for this grape and wine are Petit Cabernet, Petit Vidure and Vidure, and in Italy, Uva Francese. 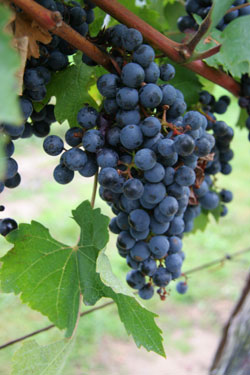 Cabernet is grown all over the world - South America; Australia; Lebanon; Long Island, NY; Northern California; and of course France. The grape is very durable and adapts to various climates well. The two areas of Bordeaux, France that use this grape - Médoc and Graves - have only created the red wine since the 18th century, so it is a relatively new occurrence. The grapes seen on this page were growing at the Inniskillin Winery in Niagara, Canada.

Red Bordeaux wines are created with Cabernet Sauvignon, often blended with Cabernet Franc and Merlot. This same set of grapes is used to create Meritage (rhymes with heritage), the US's answer to Bordeaux.

Cabernets can be mellow and mild, hearty and rich. It has a deep red color, with the primary taste being black currant. Other overtones can include blackberry and mint. Traditionally aged in oak, the wine also takes on an oaky, vanilla flavor. Higher quality cabs age extremely well (although a bit slowly), developing a sprinkling of five or six tastes within it.

Cabernet goes well with beef, lamb and goose, especially when cooked with herbs. It also is a great match for brie, cheddar cheese and chocolate.

Genetic testing has shown that Cabernet Sauvignon sprang into life in the 1600s when nearby plants of Cabernet Franc and Sauvignon Blanc happened to fertilize each other, creating a cross of a child. Luckily local farmers realized how well this new vine was doing and began taking cuttings of it! Cuttings are how all grape varieties in the world are propagated and developed. Grapes cannot be planted from seed and have a child identical to the parent.

The glass that Riedel recommends for a Cabernet Sauvignon has a large bowl, to provide ample surface area for the wine's aromas to be smelled. The point here is not to fill the glass full of a lot of wine - rather, it is to allow a lot of the wine to interact with the air while it is sitting on the table, to help it develop the fullest flavors for your nose and mouth.

Lisa's favorite red is Cain's Cain Five, which is a blend of Cabernet Sauvignon and other reds, the exact blend depending on the year.