Chaucer wrote the Canterbury Tales back in the late 1300s, in the Middle Ages in England. This well known set of stories describes a group of 29 travellers on a pilgrimage to Canterbury. What can these stories tell us about wine consumption back in the days of Robin Hood? 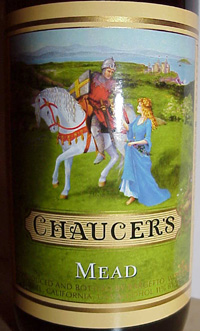 Well, right in the third line of the story Chaucer talks about April having "... bathed each vein with licquor that has power" and bringing life to the world again. Apparently alcohol was known to be a potent force, and rightly so. The Romans had brought vineyards to England, and they already had a tradition of ale making and mead making.

While the first companion, a Knight, is described without reference to wine, his son the squire is "Prinked out he was, as if he were a mead, All full of fresh-cut flowers white and red." Mead is a honey wine well known to the medieval people, and is very youthful, vibrant, fruity, bright yellow. Chaucer is describing the squire as a fresh-faced, youthful person.

The next in the tale is the Prioress, a nun. She was very neat - "Her upper lip was always wiped so clean - That in her cup was no iota seen - Of grease, when she had drunk her draught of wine." Wine of this time was very acidic, and often had spices mixed in to temper this.

Of the Monk it was said, "In towns he knew the taverns, every one, - And every good host and each barmaid too." He seems to be more of the ale type!

The clerk from Oxford, on the other hand, "He loved right well his morning sop in wine." Apparently the 'no drinks before 5pm' rule was not one he believed in. Wine was not his only passion, for "His bread and ale were always right well done; A man with better cellars there was none." He was a man who liked alcohol in many forms. Perhaps he was one of the first beer-tasters, for "Well could he tell a draught of London ale."

While the clerk owned his liquor, the next person in the tale seemed not to. Of the sailor it is said "Full many a draught of wine he'd drawn, I trow, Of Bordeaux vintage, while the trader slept." Note that even back in the medieval days, that Bordeaux is well acclaimed!

The Reeve was a man who liked rich reds. "Well loved he garlic, onions, aye and leeks, - And drinking of strong wine as red as blood. - Then would he talk and shout as madman would. - And when a deal of wine he'd poured within, - Then would. he utter no word save Latin." Apparently the wine made him very generous - "Why, he would suffer, for a quart of wine, - Some good fellow to have his concubine - A twelve-month, and excuse him to the full - (Between ourselves, though, he could pluck a gull)."

At the end of the prologue, Chaucer says that with their meal, "Strong was the wine and pleasant to each guest." Wine helped fortify them against the arduous pilgrimage which lay ahead. The host offers a contest to who can tell the best tale on their return, and "We stood committed to his government. - And thereupon, the wine was fetched anon; - We drank, and then to rest went every one, - And that without a longer tarrying."

With all of this wine and ale being mentioned just in the prologue, you can imagine how important it was to the medieval folk, and how integral it was to their way of life! Water of the time was often unsafe to drink, so it was expected that people would drink the much safer alcoholic beverages. Grab some mead from the local wine store, get a copy of the Canterbury Tales, and immerse yourself in a way of life that, while long past, is remarkably meaningful even in today's society.

Mead in the Miller's Tale

Wine in Movies and Books