Having made a few wines, I was very curious when a friend of mine invited me over to watch him brew some beer. After all, both start with natural ingredients and end up with an alcoholic beverage. How different could the two processes be? As I found out they are quite similar, although the order of some steps are different between the two. And, of course, you would only want to drink wine in the end. 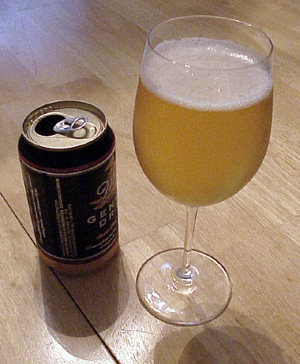 OK, with wine you start with grapes. With beer, you start with cracked grain, hops, barley, wheat, and water. You could consider it a blended wine, perhaps. Working with a kit, we began by putting a "tea bag" of cracked wheat and barley into boiling water, to flavor it. Ten minutes later, step 1 was done.

Next, we mix in the barley dry malt and wheat malt and boil this. A malt is a grain allowed to germinate, then dried. The starches in the grain become sugars - food for the new plant - and better to ferment with. Bean Sprouts! Perhaps think of all of this as the 'pulling off stems and washing off the spiders' step a winemaker takes. It's preparing the raw ingredients for fermentation.

The next step, tossing in bittering hops, might be adding the oak chips, which some nefarious wineries do to impart flavor. After 30 minutes you add in Irish Moss (i.e. sarageen, a seaweed) which attracts the protein and clarifies the wort, as the mixture is now called. While winemakers tend to clarify at the end of the process, before bottling, this is again exactly what goes on with a wine.

Now the wort is poured into a fermenting pail, filtering out the sludge that remains of the malt and pellets. OK, so this is where the grape juice, sans mice and stems, goes into the stainless steel tank at a winery to begin its fermentation process. In both cases yeast is added and encouraged to multiply, through nutrient and warm temperatures. As it begins to ferment the liquid, it creates carbon dioxide, turning the sugars in the mixture into this gas and alcohol. An airlock on the pail allows the gas to escape, in our beer making process, just as it would with a wine tank.

After a few days, fermentation slows naturally. The beer (or wine) is racked into a new container, leaving behind the dead yeast cells. This new container is allowed to sit for a period of time. For the beer kit it was 7 days, but for wines this can be anywhere from weeks to years. At some point the liquid becomes ready for bottling.

What does this all mean? If you're a home winemaker or beer brewer thinking about trying the opposite hobby, you should be able to use much the same equpiment, and simply find the raw ingredients for whatever you want to try making. In the end, though, only wine is worthy of drinking and enjoying, so be sure to find beer drinkers to foist all of your wort-products on!