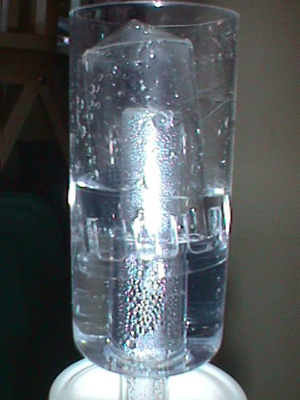 Making wine at home is easy and great fun. Every year we make up a batch of Dandelion Wine which we enjoy greatly. One of the only "unusual" pieces of equipment you need is an airlock. Just what is an airlock, and what does it do?

The key part of making a wine is the fermentation process. This is the part when the little yeast cells munch on the sugar in the wine mixture, kicking out alcohol and carbon dioxide. The alcohol is, of course, good. But the carbon dioxide is a gas. If you had a sealed container, and those yeast kept making more and more carbon dioxide, the container would blow up. That would be bad. 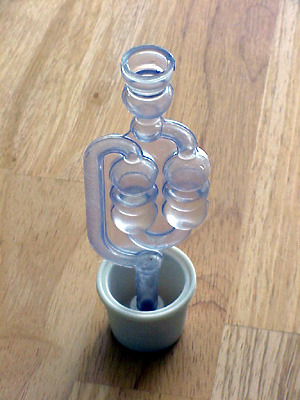 On the other hand, you can't just leave the top off the container. While that would let the carbon dioxide escape, it would also let lots of oxygen in. And oxygen isn't a good thing to mix with wine - it turns it into vinegar.

The answer is an airlock. The airlock lets the carbon dioxide escape. It also doesn't let air enter easily. It's not that it has to BLOCK air from coming in exactly. The carbon dioxide inside is under pressure and wants to get out. But the air outside isn't actively trying to get in. Think of it as a bottle of soda. If you shook it up and then laid a piece of saran wrap on top of the bottle, the outside air wouldn't rush in. But the bubbles inside would rush out.

So, looking at the above two pictures, this is how an airlock works. It gives a PATH to the bubbles inside to get out, bubbling out through a layer of water. The air outside doesn't actively push through the water, so it doesn't get in.

If you don't have a real airlock, you can create something pretty good for your home winemaking efforts. First, saran wrap. If you put it over the opening of your container with a loose seal, the air outside won't push to get in. But the bubbles inside will be able to push their way out.

Next, try a curvy straw. Cork the opening of the container and only have the straw provide a path from inside the container to the outside. Now make the straw go up, down, and up again. Put a bit of water into that final down-to-up elbow. The bubbles inside will push their way past that water area easily, but air outside won't go in past it.